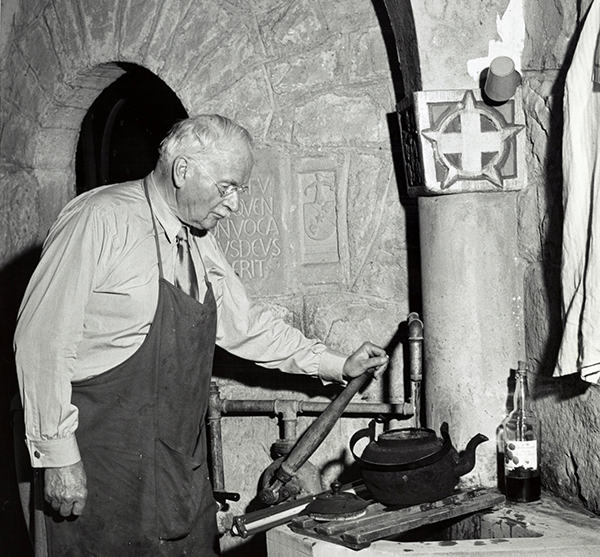 How do the ideas of C.G. Jung apply to finding and experiencing meaningful work? What is necessary psychologically to find the right career? What are Jung’s ideas about doing “the work of a lifetime”?  How do inner conflicts hold us back in our profession? In this class we will explore Jung’s writings, and those of his pupil Marie-Louise Von Franz, to address these questions and other common work issues such as dealing with difficult people and bosses, achieving acceptance and rewards, and understanding how our work can make a contribution to the world.

William Baker, PsyD, is a clinical psychologist and psychoanalyst in private practice in New York City. He is currently on the faculty at the Ferkauf Graduate School of Psychology at Yeshiva University, the William Alanson White Institute, and the Philadelphia Association of Jungian Analysts. Dr. Baker also serves as a member of the editorial staff at the Journal of Analytical Psychology.

Gary Brown, LCSW-R, LP, is a Jungian analyst in New York City. He is a supervising analyst on the faculty of the C.G. Jung Institute of New York and former vice president of The New York Association for Analytical Psychology. He is a member of the Foundation’s Continuing Education faculty and he was also past president of the Mid Hudson Jung Society.

Sanford L. Drob, PhD, is on the Core Faculty of the doctoral program in Clinical Psychology at Fielding Graduate University in Santa Barbara, CA, and the C.G. Jung Institute in New York. He holds doctorates in philosophy and clinical psychology and served for many years as the Director of Psychological Assessment and Senior Forensic Psychologist at Bellevue Hospital in New York. His Reading the Red Book: An Interpretive Guide to C. G. Jung’s Liber Novus was published by Spring Journal Books, in June 2012. His other books include Kabbalistic Visions: C.G. Jung and Jewish Mysticism, Kabbalah and Postmodernism: A Dialog, and Archetype of the Absolute:The Unity of Opposites in Mysticism, Philosophy and Psychology.

Cynthia Poorbaugh, MFA, LP, is a Jungian analyst in private practice in New York City and Cold Spring, NY. She is a teacher and supervisor, and has presented papers on art and astrology at psychoanalytic training colloquia and international conferences. She has previously taught for the C.G. Jung Foundation on the relationship between Jung’s archetypal theory and astrology, and continues with her research into how astrology illuminates key facets of Jung’s theory and the symbolic attitude.

David Rottman, MA, is past President of the C.G. Jung Foundation. He holds a Masters in Applied Psychology from New York University and is the author of the book The Career as a Path to the Soul. He was Senior Vice President in charge of Career Development at JPMorgan Chase from 1984 to 2011 and the past President of the Career Counselors Consortium. He is a longtime member of the Foundation faculty and has a private practice in New York City.

Programs are held at the C.G. Jung Center at 28 East 39th Street, New York City,
unless otherwise indicated on this announcement.

Programs are held at the C.G. Jung Center at 28 East 39th Street, New York City,
unless otherwise indicated on this announcement.

The full fee must be paid at time of registration. You may register by mail or fax (use registration form, below), or by telephone: pay with your MasterCard or Visa. Or you can register in person at the C.G. Jung Foundation, Monday–Thursday 10:00 am–5:00 p.m. FAX # 212-953-3989.
Seating is limited and early purchase of tickets is strongly recommended.

YOU DO NOT NEED A PAYPAL ACCOUNT. HERE IS HOW TO PAY WITH CREDIT CARD: On the Paypal login page, look below login fields for a boxed link that reads PAY WITH DEBIT OR CREDIT CARD.

Refunds for Advanced Seminars courses, less $50 for administrative services, will be made up to seven days before the first session. See below for full policy on refunds and cancellations.

These seminars are intended both for the general public and for professionals.

Please note that credit is granted separately for each of the seminars. The program is subject to change without notice.

The C.G. Jung Foundation reserves the right, in its sole discretion, to cancel a program at any time. If the Jung Foundation cancels a program, you will receive a full refund of your registration fee.

Refunds are available (less a $50 processing fee) up to seven days before your program. Nonrefundable credit toward a future Jung Foundation program (less a $50 processing fee) is available if you give notice between seven and one day(s) before your program. Credit may be applied to any Jung Foundation program for one year following date of issue.

No credit or refund is available if you cancel on the day of the program; if you do not attend; or if you leave a program early for any reason.

Requests to cancel should be made in writing or by email. Written requests may be sent to: