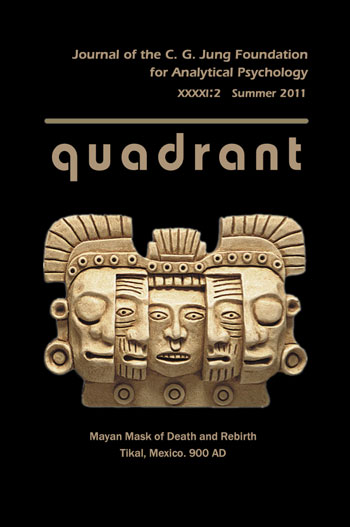 From the Editor — Kathryn Madden

As I reflect on the Summer 2011 issue of Quadrant (our first ever presented completely online), I find myself thinking about, what in pop culture is known as, “blockbuster season” at the movies. Perhaps it is because I am writing this editorial in the midst of the advertising campaign targeting the pocket money of the millions of adolescent boys and girls (but mostly boys) who attend these movies and buy the related merchandise. I do not mean to say, however, that the issue is replete with articles on psyche and film: in fact, it hasn’t a single one. The articles and other offerings in this Quadrant do have in common an interest in examining various aspects of the archetypal and symbolic universe that are revealed to us in C. G. Jung’s personal journeys in and writings about the realm of the unconscious.

Dr. Kirsch presents his understanding of Jung’s Red Book speaking to the considerable difference between what Jung writes in his Black Books and what appears in The Red Book. Kirsch discusses Jung’s ambivalence about having The Red Book published. He shares what we can learn about Jung through The Red Book, what captivates him about The Red Book, and why there is little mentioned in The Red Book about Jung’s outer life.

The influence of C. G. Jung’s work on that of Indologist Heinrich Robert Zimmer (1890-1943) is well known to the English speaking world, but how important Zimmer’s work was for Jung has, so far, not been highlighted. Zimmer’s groundbreaking book on the function of mandalas, entitled Kunstform und Yoga im indischen Kultbild (Artistic Form and Yoga in the Sacred Images of India), published in 1926, was an important step along the way of Jung’s own understanding of how the mandala was used in the East. The two men finally made each others’ acquaintance in Zürich, Switzerland, on the occasion of a series of lectures on Kundalini Yoga at Jung’s Analytical Psychology Club. Zimmer, a Sanskrit Scholar working as a Professor of Indology at the Ruprecht Karls Universität in Heidelberg at the time, lectured “On the Various Forms of Yoga in the Indian Tradition.” Upon this first meeting, Zimmer and Jung began a professional friendship that would last until Zimmer’s early death in 1943. This article traces the indirect collaboration of these two scholars—using as yet unpublished and untranslated letters that passed between them in the 1930s and ’40s—with an emphasis on the importance of Zimmer’s scholarship for the development of Jung’s theories of the collective unconscious and archetypes.

Beginning with Gilgamesh, this article focuses on the mysterious, timeless messages of myths and heroes with an emphasis on archetypal meaning and their evolution. As consciousness and compassion evolve, so must the hero. Martin Luther King, Mohandas Gandhi, C. G. Jung, Joseph Campbell, Sam Keen, James Carse, Jane Goodall, Aung San Suu Kyi, and countless others represent this calling. The planetary hero — the one with wisdom and compassion — strives to save nature, animals, and humanity. The modern hero seeks a contemplative and action-oriented wholeness.

Richard Wagner’s libretto (1857) Tristan und Isolde is based upon Gottfried von Straburg’s epic romance Tristan (ca. 1210); but Gottfried’s Minnegrotte is missing. Ober’s alchemical interpretation of the Minnegrotte is reinterpreted here as the emblem of a macrocosmic minne-retort in which the author brewed his aesthetic minne-ideal. Wagner completed and transformed Gottfried’s fragment into his own Gesamtkunstwerk ideal. Frau Minne, Wagner’s imago Dea, transmutes his animus Tristan, and Isolde, his anima, by means of a Liebestod elixir into its golden goal: one creative self, wed on the crystal bed of a cosmic minne-retort.

We live in unprecedented times that demand change at the deepest psychic levels if we are to survive. As a species we no longer have the luxury to indulge in patriarchal power struggles or we will destroy the planet and ourselves. This warning also comes through the work of Marion Woodman, renowned Jungian analyst, teacher, and author, who says, “Most thinking people realize that we have come to the end of a paradigm that is not only not serving us, but is destroying us. The culture is collapsing and only a melding of both masculine and feminine energies, integrating body and soul, can halt the current social and environmental devastation.”

It is in this urgent, sobering, and important context that the film, Marion Woodman: Dancing in the Flames was conceived. This is no ordinary film, but a rare, powerful, and moving story about the dramatic evolution of an individual soul beautifully captured on film. Yet the deeper story is not about one individual alone. What makes this timely film so compelling is the underlying archetypal message about living, dying, and transformation, a challenge we all need to confront in the new millennium.

Painter Brent Weston, who hails from Tennessee, has been selected as Quadrant’s Distinguished Artist of 2011…… Brent has painted many mandalas without a formal study of their meaning. He has a fascination with Carl Jung’s teachings on the subject and has attended Jungian Seminars on spirituality and psychology. This series of nineteen mandalas is his most recent interior journey into the subject matter, based upon his response to the cover and words of Dark Light of the Soul by Kathryn Madden.

At the primordial level, depth psychology raises to consciousness a new experience of otherness, a transcendent ultimacy, beyond the psyche that continuously encroaches upon, seduces, dismembers, and transforms surface immediacy. Making the unconscious conscious in a variety of expressive forms, especially through art and painting, is one of these creative modes….