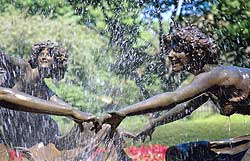 This course will introduce the basic principles of the psychology of C.G. Jung: consciousness, the personal unconscious, symbols, dreams, archetype, ego, persona, shadow, anima/animus, the Self, and individuation. Readings, lectures, and group discussion will lead participants toward an understanding of these concepts.

In this course, we will examine the history, theology, and psychology of Islam, in the context of its challenge to the West. Given the importance of Islam, it is essential for us to explore its imagery and cosmology in order to understand its archetypal underpinnings.

Was wirst du tun, Gott, wenn ich sterbe?
[What will you do, God, when I die?]
C.G. Jung Nietzsche’s Zarathustra, p. 145
From Rilke’s Book of Hours
[The only Rilke quote in Jung’s work]

C.G. Jung and R.M. Rilke both attended the 1912 Munich Psychoanalytic Congress, and could have possibly met since they shared a common friend, a psychoanalyst Lou Andreas-Salome, Rilke’s muse and confidante. However, given the growing tension between Freud and Jung, the meeting apparently did not take place. Jung acknowledged that both he as an empiricist and Rilke as a poet ultimately drew from the same spring, the collective unconscious and praised Rilke’s poetry for “much psychology … hidden in [it].” In this course, we will imagine that our protagonists met and mutually influenced each other. We will look both at Rilke’s poetry through the prism of Jung’s ideas to explore its psychological depth and at Jung’s ideas in the poetic light of Rilke to disclose their mythopoetic imagination. See Fall II, Jung and Rilke for class times for Part II.

Through lecture and slide presentation, we will explore connections between analytical psychology, the body, and art. Among the topics to be discussed will be the quantified body and number archetypes; biological releasers as a basis for archetypal recognition (the face, the Persona, the Self); the decorated body as a reflection of initiation and stages of life; the tattoo and the attempt to use archetypes as magic; the Theory of Correspondences; and the mythological and cosmological body.

This course is a continuation of Basic concepts of Analytical Psychology. Through lecture and discussion, participants will gain a deeper understanding of selected principles first introduced in the basic course, as well as explore concepts not yet covered, such as synchronicity, alchemy, and active imagination.

The Tibetan Book of the Dead describes what happens between death and rebirth. It is the crucial period of opportunity: one can escape the repetition of birth altogether, or at least choose one’s next karmic surroundings for the best possible chance of development. This course will look at this beautiful text from a depth psychological perspective. From this perspective it describes the inner workings of the psyche, and it is our task to make sense of its wisdom in our lives. We will also explore how this perspective can be applied to other sacred texts, and how these manifestations of the psyche differ from others, such as dreams and myths.

See Fall I, Jung and Rilke, Part I, for course description.

Orphesus and Persephone, Dante and Hieronymus Bosch: each adds another facet to the meaning of the journey through the underworld. In this course, we will look at classic motifs, at Jung’s own interpretations of the underworld, including his own dream experience, at Hillman’s re-visionary approach, and at more recent cultural reflections of the “depth” aspect of depth psychology.

This course will offer an overview of the primary religious traditions of India, China, Tibet and Japan and then present the major writings of C.G. Jung on these same religions. We will compare Jung’s ideas with current scholarly and popular thinking, and discuss the subjects from the point of view of comparative religion studies and depth psychology. The religions represented include Hinduism, Taoism and Chinese religion more generally, and the Buddhist traditions of Tibet and Zen. The text for the course will be C.G. Jung’s Psychology and the East, translated by R.F.C. Hull.

Donald Grasing, C.S.W., is a Jungian analyst, social worker and psychotherapist. A graduate of the C.G. Jung Institute of New York, he is a member of the Family Therapy Faculty at the Albert Einstein College of Medicine and supervises trainees at the Bronx Psychiatric Center Training Unit.

John M. Lundquist, M.L.S., Ph.D., is the Susan and Douglas Dillon Chief Librarian of the Asian and Middle Eastern Division of the New York Public Library. He has taught at Pace University and the Cooper-Hewitt Smithsonian Institution, among others. His works include The Temple: Meeting Place of Heaven and Earth.

Sylvester Wojtkowski, Ph.D., is a Jungian analyst in private practice in New York City. He is a graduate of the New School for Social Research and the C.G. Jung Institute of New York.

Tobi Zausner, Ph.D., has an interdisciplinary Ph.D. in Art and Psychology and is also an award-winning painter who has exhibited in major museums. She writes and speaks worldwide on the psychology of art and is Chair of Art/Art History in the Society for Chaos Theory in Psychology and the Life Sciences.

All programs are held at the C.G. Jung Center at 28 East 39th Street, New York City, unless otherwise indicated on the tickets and individual program announcements.

All 5-week courses are $110 for members and $125 for the general public, unless otherwise specified.

The full fee must be paid at time of registration. You may register by mail, by telephone or fax with your MasterCard or Visa, or in person at the C.G. Jung Foundation, Monday–Thursday 10:00 am – 5:00 pm. FAX # 212-953-3989. Seating is limited and early purchase of tickets is strongly recommended.

Informal gatherings are scheduled the first Tuesday of each month. An analyst or other specialist guides discussion on issues that touch our lives — aging, homelessness, the effects of September 11th, AIDS, and others. Bring a brown bag lunch – coffee, tea and cookies will be provided. No reservations required, suggested contribution fee of $2.00. All are welcome.

Even if the authority of religious ideas, as Jung understood them, has collapsed (CW 18, ¶1577), he suggests that we can still cultivate within ourselves a beneficial “religious attitude” to help us navigate through our world of increasing fragmentation. By mediating our thoughts and emotions through dialogue between consciousness and the unconscious, we encounter the age-old tradition of meditation, a subtext for many of Jung’s later writings. Principles of Zen meditation are the core of the latest treatment modality for borderline and suicidal patients in New York State hospitals: DBT (Dialectical Behavior Therapy). During this lunch-hour, we will engage the process of cultivating a silent converstion within the hermetic vessel that is one’s self.

Royce Froehlich, C.S.W., M.A., M.Div., is a psychotherapist in private practice and an analyst-in training at the C.G. Jung Institute of New York. He holds a training certificate in DBT and is a member of the Dharma Drum Mountain Buddhist Association.

This talk will focus on a woman’s experience of entering menopause. With the loss of the physical ability to bear new life comes a visceral encounter of death and barrenness within one’s own being. This death experience can only lead to a meaningful rebirth if a woman is in a conscious relationship to her inner masculine, her animus.

The psychic reality of this physical transition will be amplified with images from the realm of the triple goddess Hecate, whose knowledge, although not characterized by age and available to women throughout their development, plays a vital role in reconnecting women to a sacred feminine ground.

Examples from contemporary culture will include “The Vagina Monologues” and “Menopause, the Musical.”

We will focus on contemporary culture’s supression and fear of the feminine, especially in its darker, death-holding aspect. When denied her rightful place in life, the dark feminine takes “revenge” by turning women into “evil hags,” youth-obsessed, hysterical and in despair.

The light and authority of Hecate’s torch, forever spiraling between the lower and upper world, can bring a conscious experience of a compassionate, wise crone, the menopausal woman as a “crowned elder,” from which individuals and society alike would benefit.

Heidi Kolb, M.A., C.S.W., is an analyst-in-training at the C.G. Jung Institute of New York and a psychotherapist in private practice in New York City. She holds degrees from New York University and the University of Salzburg in Austria. She has a professional background in theatre and has explored shamanic traditions for over twenty years. A founding member of one of the first women’s centers in Austria in 1975, she has a long-standing interest in the life of women in our world and the role of the feminine in our culture.

The winter solstice is celebrated as a holiday or new year for many cultures and religious traditions, including, of course, our own. This talk will survey the background and meaning of some common and not so common symbols that surround Christmas, Hannukah, and the change of our calendar. For instance, why is light so important? What about birth and rebirth? Who is Janus, the god for whom January is named? Celebrate this year with a broader knowledge of what is behind our customs and habits, from an archetypal point of view.

Authentic Movement is Carl Jung’s Active Imagination in movement. Developed in the 1950’s by Mary Whitehouse, a former student of Jung’s, Authentic Movement has evolved into a form that has a wide variety of uses, from the technical (for dancers to purify their movement vocabulary) to the intimately psychotherapeutic in individual or group work.